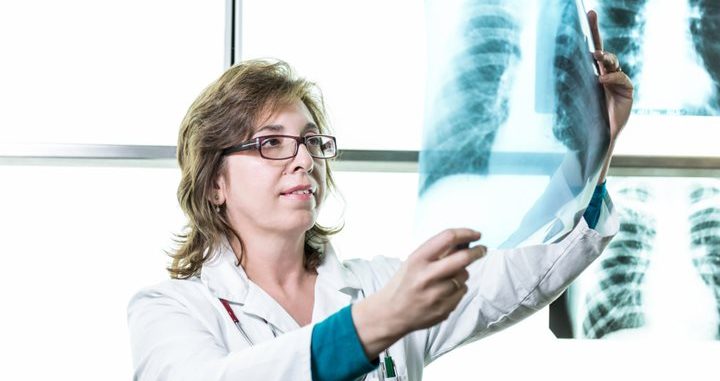 Lung cancer causes more deaths worldwide than any other form of cancer. There are two main forms of the disease: small cell and non-small cell, and the vast majority of cases (85 to 90 percent) belong to the latter category. Small cell (or oat cell) tumors often originate in the bronchi and multiply and metastasize rapidly.

The two forms require different treatments, as indicated below in the treatment section of this article. The non-small cell category embraces several subtypes, most of which start closer to the center of the lungs, though large cell carcinomas can originate anywhere in that organ. Many malignancies contain more than one of these subtypes.

The most common causes of lung cancer involves exposure to tobacco smoke. Smoking cigarettes and, to a much lesser extent, smoking cigars and pipes can increase susceptibility to lung cancer, as cigarettes contain over sixty carcinogens. The disease rate is 17.2 for male smokers and 1.3 for male non-smokers. Passive smokers are also vulnerable to lung cancer. Gas pollutants such as radon and asbestos are also common culprits.

Some places, such as Cornwall in England, have unusually high concentrations of radon gas in their rocks and, in consequence, the lung cancer rate in those regions is high. Viruses are also known to be a cause of lung cancer, although not a major one according to the majority of scientists. They are known to be a major factor in animals; they can wreak havoc by disrupting the cell cycle, enabling the cells to multiply at the rapid rate that characterizes all cancers. The human papillomavirus, for instance, is responsible for a minority of cases of various types of cancer. Another agent that can contribute to lung cancer is particles in the air.

Symptoms of the disease include a persistent cough or a long-lasting respiratory ailment. But it can take two or even three decades for these and other symptoms to develop. Victims may also cough up blood; be short of breath; lose weight; have less appetite; feel a nagging pain in the chest; or have difficulty breathing and swallowing. Certainly the last will be a prominent symptom if their is an obstruction in the air passage.

As with all types of cancer, that of the lungs has three major forms of treatment: drugs (chemotherapy), radiation, and surgery. Any two or all three of these many be applied in combination. The particular therapy that is used depends on the type of cancer, as well as how far it has advanced, how much it has spread, and the general health of the patient.

Until the 1940s, surgery was the only method in existence, and its goal was and is to get out the entire tumor. For small cell cancer, surgery is never used alone, but drugs can be administered provided the patient is in sufficient health. Drugs and radiation are combined in cases where the cancer has advanced to stage 3, such that the tumor cannot be surgically removed without harming the patient.

Gefitinib and erlotinib are two commonly prescribed drugs for cancer in its advanced stages. The survival rate for lung cancer is very low. Only about 14 percent of those diagnosed with the disease survive for more than five years afterwards?